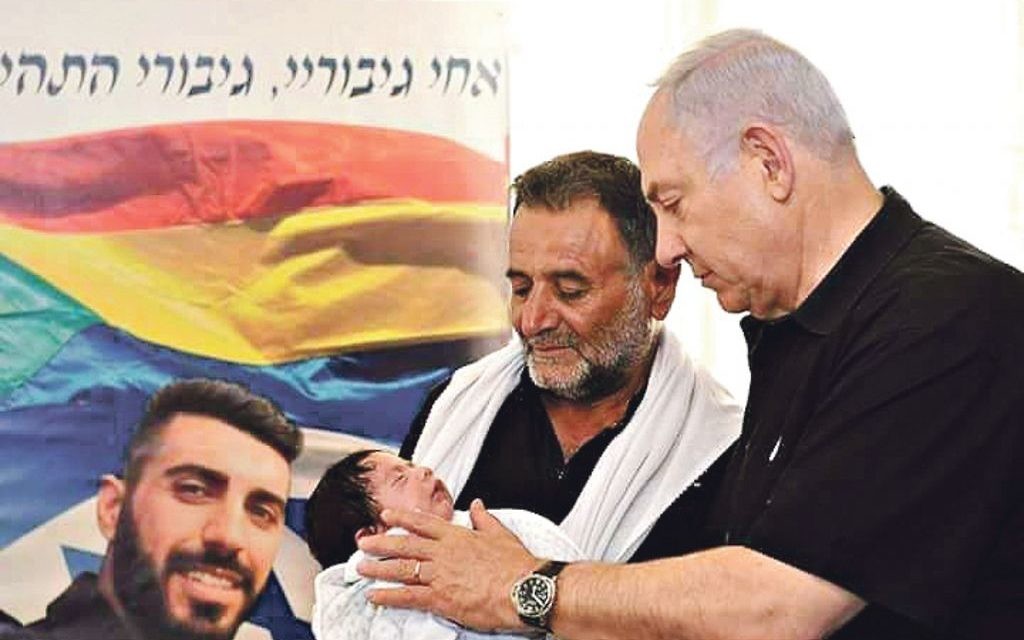 Afif with grandchild Ramos and Benjamin Netanyahu. On poster: his late son

Afif Sitawi, father of the late Israeli-Druze hero Hail Sitawi, was in the UK this month visiting Jewish and Christian communities in London, Leeds and Manchester and speaking at the Zionist Federation’s annual dinner.

Hail was 31-years-old when he was shot and killed during an attack at Temple Mount in July by three Israeli Arab gunmen. The attack caused a diplomatic furore, with Israel reacting by closing the holy site for Friday prayers and installing new security features, but protests in the Palestinian territories and across the Arab world soon led to the mosque’s reopening.

Speaking to Jewish News, Afif described how his oldest son Hail died just 14 days after the birth of his own first child, a son named Ramos, now nine months old.

Hail was one of two Israeli police officers killed as the three gunmen – all Israeli citizens – made their way down from Temple Mount to Lion’s Gate, before shooting Hail and Kamil Shnaan, 22. Both were from Druze towns in Israel’s north.

Football fan Hail named Ramos after the Real Madrid star who, on hearing the story, went to see the baby and Hail’s family when the team played in Israel last year. “It was a very emotional moment,” says Afif, adding that Hail’s brother, 24, is considering a career in the police.

Afif describes Hail as “proud to serve” and “happy all the time, a smile on his face all the time, the kind of man who always wanted to help family, friends, the community. He was loved by everybody. I was a very proud father”.

Asked what message Afif was bringing to London, he says: “I’m hopeful that my son’s murder will be the last one in Israel and the last one in the world. I come to promote peace and coexistence.”

The Druze are an Arab-speaking minority living in Israel and other countries in the region who have, for centuries, fought for their survival in the Middle East as a minority, defending their community. Afif says: “One of our strongest values is to be loyal to our homeland, loyal to the local sovereign. So when the State of Israel was established, the Druze community pledged allegiance with no conditions. We’ve been fulfilling that ever since.”

He continues: “We are fully integrated, we love the country. This is the important message for us: to live together in peace.”

Afif’s village has Druze, Muslim, Jewish and Christian residents. “The relationship is very supportive, it’s amazing coexistence,” he says. “People from all walks of life, from all religions, they came to pay condolences, to pledge to help. I welcome everybody.”

Afif was in the UK supporting the Druze Veterans Association, and said: “We have a dream to give 100 Druze students scholarships to study in Israeli universities, particularly in professions such as engineering and hi-tech, and have them fully integrate into Israel.”

Explaining how he wants to have a big launch event on the anniversary of Hail’s death, on 14 July, he adds: “We want to give the scholarship in the name of Hail to commemorate this beautiful man and his love for the community and the next generation.”